I wrote and self-published an article about Watchmen (hopefully I will post that entire article soon).  I will be writing another article on Watchmen.  Before I write this new article, I am taking notes.  Here are my notes.  This first entry is all of my notes for chapter 1.  I will be posting about one chapter every day.  I recommend reading along for the full effect.  Here we go.

The cop says “somebody really had it in for this guy”. He’s right! Veidt had it in for him ever since the comedian taunted him (when Veidt was Hooded Justice).

Cop “He had muscles like a weightlifter. He would have put up some kinda fight. I’m certain.” (issue 1 pg 2). The only weightlifter in the book was Rolff – the guy hooded justice killed to make people think that he (hooded justice) was dead.

When Rorscach tells Adrian to “call (Rorschach) a Nazi too”, Adrian’s expression shows that he just figured something out about Rorschach.

He figured out that Rorschach considers himself to be modeled after the Comedian and will eventually find out about Adrian’s secrets (plan to kill people and that Ozymandias is immortal). It’s at that moment that he figures that he will have to put his Moloch/Rorschach plan in motion. Hollis Mason’s “Under the Hood” is a direct reference to Hooded Justice. Who is under the hood is the key to the entire series.

In Watchmen (created in 1986), there is a research facility where Dr. Manhatten lives and works. He does all kinds of stuff bending the laws of physics and creates planet changing technologies. The name of the facility as we see Rorschach enter in issue 1 reads “Rockeller Military Research Center – Founded 1981” and there is a shield that is very similar to Superman’s “S” logo perhaps denoting that there is a superhuman stationed there. In reality Laurence Rockefeller (brother of David) became very interested in UFOs during the early to mid 1990s. He funded, lobbied and sponsored several UFO-related projects including the “Briefing Documents” which was a report that went to many poiticians in and out of the US and convinced many countries to change their official stance on the subject of UFOs (most notably France and Chile). “I sponsored this report because it seemed useful to bring together the most credible evidence about UFO sightings in the form of eyewitness reports, official statements, and scientific views. While I do not necessarily agree with every finding and conclusion, I do believe that the evidence presented indicates that this subject merits serious scientific study. Toward that end, I hope that our government, other governments, and the United Nations will cooperate in making any information they may have available.” Laurence Rockefeller.

Dr Manhattan “A live body and a dead body contain the same number of particles. Structurally, there’s no discernible difference. Life and death are unquantifiable abstracts. Why should I be concerned?” Although Manhattan says it, this appears to be part of the philosophy of Ozymandias. Rorschach warns of an “old foe with a grudge”. Hooded Justice definitely had a grudge against the Comedian.

What Dr. Manhattan was doing in the Rockefeller facility in 1986 is similar to what scientists are now doing at CERN. The Large Hadron Collider at CERN is producing the world’s highest-energy collisions and offers the best chance at discovering superparticles for the foreseeable future. After the discovery of the Higgs particle during 2012, it was expected that supersymmetric particles would be found at CERN, but there still has not been any evidence of them. TheLHCb and CMS experiments at the LHC made the first definitive observation of a Strange B meson decaying into two muons, confirming a standard model prediction, but a disappointment for those hoping for signs of supersymmetry.[17] Neil Turok at Perimeter Institute concedes that theorists are disheartened at that situation, calling it a crisis. He described the LHC results as “simple, yet extremely puzzling” and said “we have to get people to try to find the new principles that will explain the simplicity”.[18] Wikipedia. Rorscach was right. About just about everything.

The end is nigh.

“you were always supposed to be the world’s smartest man, Veidt. You tell me.” Rorschach was right, Veidt did know.

He didn’t believe it was the soviets.

Millions will perish in sickness and misery (the incident at the end of Watchmen).

Cop says “up to our butts in corpses” (issue 1 pg 4) right as they pass by the spot where they (the cops along with many others) die (issue 12 pg 4). One even says to the other “whats the matter?” and the other responds “uh, nothing… just a shiver.” We (the reader) are lead to believe that he got a shiver because they were passing by Rorschach without knowing it, but in fact they got a shiver because they passed by the spot where they will die while mentioning that they would be up to their butts in corpses.

In the restaurant (issue 1 pg 25 panel 4), the female at the bottom right of the panel has the eye of Horus tattooed or made up onto her eye. This is an egyptian symbol that means protection in the afterlife.

In the book “under the Hood” by Hollis Mason, there are stories and these stories are important to understanding the whole Watchmen series, but there are certain references that if taken out of context, have a deeper or alternative meaning. 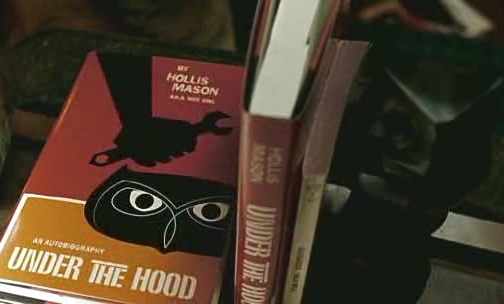 Bottom of page one – all of the references to changing faces seems to be talking about Rorschach.

Nite owl – got his from grandfather

rorschach – his are called into question

rorschach gets his from imagined father and truman?

According to the second news article written about HJ – “A tall man, built like a wrestler” may have given Ozy the idea to use a wrestler/weight lifter to cover his own “death”.

Thanks for reading and i look forward to hearing any feedback.  Chapter 2 coming soon! Jeff Lilienthal is the owner of Classic Collections, a comic and record shop located at 1972 Ridge Rd Pottstown, PA. Jeff has written and self-published several comics and articles including Goat Innards (an article about Watchmen).