The Comic for Foodies

Perhaps the most difficult medium of culture to immerse one’s self in is the world of comic books. Why are comics difficult to approach? Simply, history. Take for example the character of Batman. This year DC Comics celebrated the 75th anniversary of the caped crusader, that means that if one were to read a Batman comic, there possibly could be an endless character history new readers would have to familiarize themselves with. Although DC has constantly been trying to pull in new readers by “rebooting” their comics, trying to figure what aspects are still part of Batman’s history can be difficult to define.

I’m not condemning DC, in fact Scott Snyder’s current run on the character has been one of my favorites. Having said that, I decided to put together a list of comics that would be easy for a new reader to get into. Most of these series aren’t properties of the “Big Two” comic book companies, but the lack of a long history means that a new reader can easily read issue #1 of these series and not worry about requiring an insane amount of context.

“Chew”, written by John Layman and illustrated by Rob Guillory, documents the adventures of FDA agent, Tony Chu. What makes Tony such an interesting character is that he is a Cibopath, meaning that he learns the history of any object he eats. Additionally the world of “Chew” is one stricken by an aggressive case of bird flu, making chickens a rare and illegal commodity. To say anymore about the narrative would ruin the twists and turns. A word of warning, “Chew” can be humorous , but there are intense moments that can bring tears to any readers eye. “Chew” also features the incredible artwork of Rob Guillory, which may seem cartoonish, but works very well with the offbeat nature of “Chew”. The art is also packed with inside jokes like having the creators of “South Park” appear in a frame

“Chew” is a wonderful series that shows not every comic book needs to be about the traditional caped superheroes. “Chew” has also attracted the attention of the television network, Showtime, but as of yet the series has not gone into production. Do yourself a favor and read this foodie friendly comic. 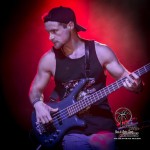